When I was pregnant with Lily, we were very quickly on the lookout for her first toy. I still have a pink teddy that I've had since I was a baby and we wanted to get our kids something that they could keep forever (hopefully). I wasn't planning on getting a licensed character, but like many baby things, I found that it was near impossible to find something that was gender neutral and still cute. I found Roo in a Disney Store and I loved the fact that he is a kangaroo (Australian) but created in the UK, just like Lily. Plus, he's a bit different than what most kids have.
Here are some of the photos we took of Lily and Roo over the first 6 months or so. If you followed our adventures while we were overseas, you would've seen these already. 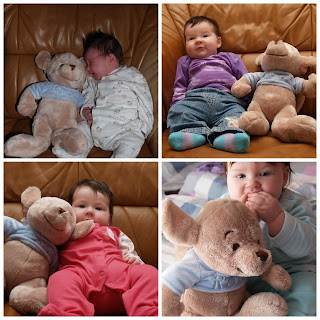 So, three years later, pregnant again, but no Disney Store to shop at (since we'd moved from the UK back to Australia), I wasn't sure how best to get Violet something similar, until we saw this Eeyore. Lily insisted on picking it up as soon as I mentioned it as a possibility, held it all the way home and then put it in a special place to wait for the baby. She and Graeme brought it in once Violet was out of the Special Care Nursery and in my room. 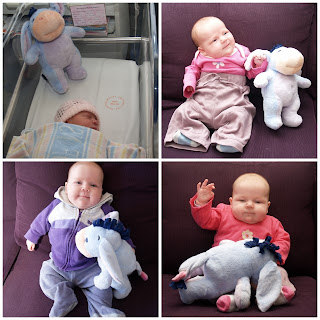 Both girls are quite attached to their toys. Violet loves to pat Eeyore and Roo is currently 'sleeping' next to Lil. Do you have a toy you've had since childhood? Did you buy your kids something special when they were born? Or am I just weird?

(My Mum made a comment the other day that I hadn't taken any photos of Violet with Eeyore and when I said I had, complained that she hadn't seen them. So, there you go Mum - are you happy now? :D)
Posted by kate at 11:45 PM