Three and a bit years ago, when we were planning the move back to Australia from the UK and looking to celebrate Lily's 1st birthday within days of arriving, my sister-in-law Jac asked if there was anything she could do to help. I told her that I had really wanted to make Lil a birthday crown, but that I didn't have the time, so she agreed to make one. Thus began the tradition of Aunty Jac making my girls a birthday crown each year for their birthdays. She has made 5 so far (4 for Lil, 1 for Violet) and we still have them all - some put away for when the girls are older, others mixed in with the rest of the dress-ups.

Tomorrow, Jac's daughter, my only niece Charlotte, turns 1, so I finally got to make a birthday crown myself. The party was a teddy bears picnic and was held today (since it was a public holiday in NSW) in a local park. Since I haven't actually asked my brother and sister-in-law about posting photos of their daughter on the internet, you just get a picture of the crown for now. Unfortunately, it is not as cute as on a baby girl's head and this isn't the best photo I've ever taken, but I obviously no longer have it on hand to take another one. 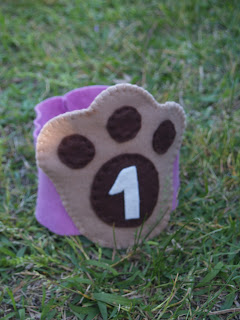 It is made from wool-blend felt and embroidery cotton and came together quite quickly and easily. The paw is a homage to Charley Bear since that is what Charlotte gets called and was the primary inspiration for the party theme. I chose purple because, well, I like purple, but also because it was one of the colours I knew Jac was using in the decorations. The green on the lower and left edge is 'Charlotte' embroidered. The only issue that I would change if I had to re-make was that I only used a single layer of felt for the band around her head and with it being pulled on and off it stretched a little. But I am super happy with it. Now my other siblings and in-laws need to start having kids so I can make more cute crowns :)
Posted by kate at 10:07 PM