This morning for breakfast, I made porridge. Lily ate what I would consider a pretty big serve for a 3 year old. Then she wanted a banana.

Now, for my friends in other countries, you need to know that earlier in the year, Cyclone Yasi wiped out most of Australia's banana crops. As a result, the things are expensive at the moment and very much a treat in our house.

So, yesterday, Lily was spoilt by her Nana who brought over a bunch of bananas. I'm not even certain how many there were to begin with (and therefore how many Lil had yesterday) but there were 3 on the bench this morning. There aren't any left. After I helped her get and peel the first one, she devoured it and begged for another. The second the words 'I guess so' were off my lips, she was peeling a second. The third one I didn't even know about, until she ran into the room holding a peeled banana and giggling uncontrollably. When she'd finished it, she proudly exclaimed, "I'm a sneaky, cheeky monkey". 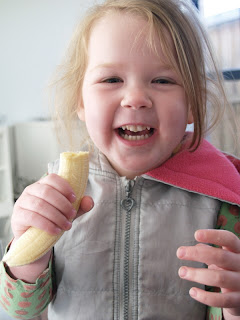 I guess that's what I get for teaching her that the only food she's allowed to help herself to is fruit...
Posted by kate at 10:31 AM

Email ThisBlogThis!Share to TwitterShare to FacebookShare to Pinterest
Labels: Lily