Everyone is feeling tired and rundown here. Violet is getting her first set of molars and Lil has some sort of bug and as a result, I am not getting much sleep. So I declared today a pyjama* day. Lily was the only one who actually stayed in her pjs. Violet was dressed first thing when her nappy was changed and I worried about having to answer the door in the middle of the afternoon, so put a track suit on. But other than that technicality, we did all the usual things you're meant to do on days like this: ate simple but reasonably nutritious food, watched a lot of tv and cuddled under quilts on the couch.

I tried to capture the day in a couple of pictures and here is the result: 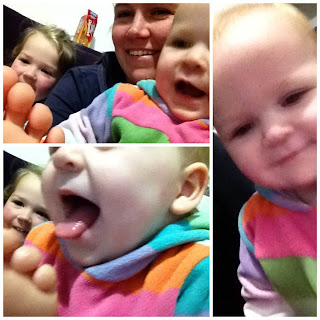 (iPad under artificial light, so the quality isn't awesome)

Lily didn't want to be in the photos, so she stuck her foot in the way. Violet decided the foot looked tasty. Then Violet decided that actually she wanted to take the pictures and stole the iPad off me to take some self portraits.
Yep, that about sums up our day.

*autocorrect wants to change pyjamas to pajamas, which is probably right, but looks wrong to me...
How do you spell it?
And, how do you spend pyjama/pajama days?
Posted by kate at 8:57 PM